I have decided to close this blog down.  I am now over on wordpress at A Slice of Life. I'm hoping to bring all of your blogs over with me.  But since I'm not 100% computer savy things could go wrong.  I'm hoping that I can use my phone to do more posts.  Since blogger and I have been fighting over me trying to do it here.  I've found over the last two years I have been using my phone for more and more things other than a way to phone/text someone.  It's amazing how technology changes the way you use things.  I'm also finding that I want to use my blog differently.  Since I am heavily involved in volunteering at my girls school, looking for work and doing the occasional crafty project.

So gorgeous peeps, I hope to see you over at the new site. 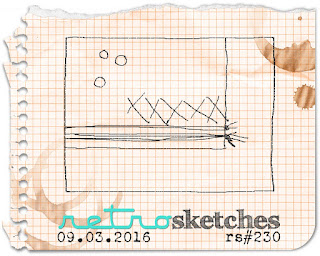 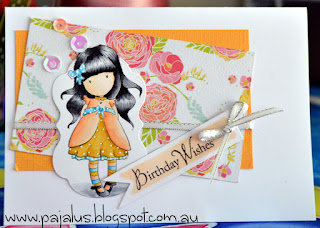 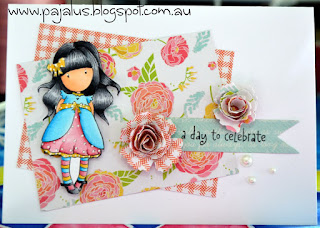 I made the top card for the challenge and then when I was finished I noticed how similar it was to the bottom card that I had made on Friday at a friend's place.  How weird is that?  I brought the Gorjuss stamp on Thursday on my way home from the movies.  I think she's so sweet and I am enjoying colouring her in with my copics.  I've even been practicing my black hair colouring.  I think it's getting better.  I decided to go with the yellows/blues on the top card, colours I normally wouldn't use.

Have a great day & happy crafting

I'm back again to share a quick card that I had made this morning using this sketch from Freshly Made Sketches.  I love sketches they are so much fun to play with. 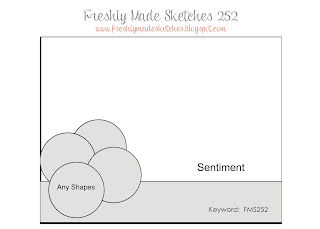 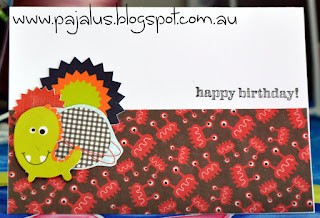 I'm using up a Kaisercraft 6.5 x 6.5 inch pad called Blast off.  I actually made this with some scraps from the pack.  It involved a little bit of fussy cutting and the sentiment is from a Stampin' Up set called Boys Will Be Boys.  The "Alien" is popped dotted up just for a bit of fun.
Well the natives aka my girls are getting restless so had better go do Mum Stuff I guess ;p.  Btw this is my second post for the day.

I'm back after a busy week of recovering from a cold and doing "Mum Stuff".  I have been card making as well - so don't feel to sorry for me.  I have found a place in Nambour that will sell my cards for me (as well as some bags I made awhile back).  So have been busy making cards to sell.  Here's hoping they do well.  I also received an order for 12 cards from a friend yesterday.  So I will be busy over the weekend.  I promised my girls that we'd go "Fathers' Day" shopping this morning and then I'd make them a card each to give to Doug.  Plus this afternoon we're going on a playdate to a friend of Bill's.  I haven't told her yet.  Or I wouldn't get any peace.   Plus somewhere in there the dog needs a walk. 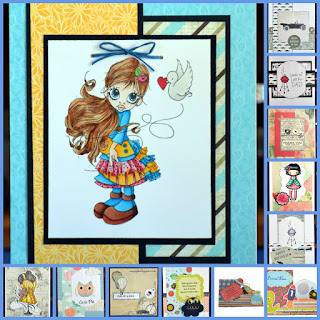 So here a few of the cards I've made to sell.  I'm hoping they do well, but won't be disappointed if they don't sell.  At this stage of my life I'm just happy to be card making.  A lot of these cards were based on sketches from some of my favourite challenge blogs.  See the left side bar to check out these fun sites.

Well peeps it's time to get going for the day.  I hope you all have a wonderful weekend and to all of those celebrating Fathers' Day tomorrow have a great day.

Email ThisBlogThis!Share to TwitterShare to FacebookShare to Pinterest
Labels: Cards

Well I think I've succumbed to Doug's Man Flu.  I look & feel like a bus has run me over & then backed up for another go.  So no Tuckshop for me today.  It's something I do for a few hours every Monday to help out.  Instead here is a card I made yesterday for the latest Retro Sketch Challenge. 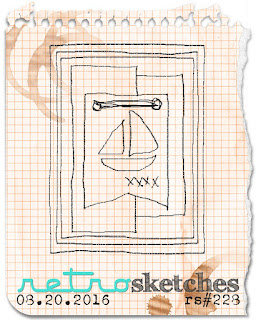 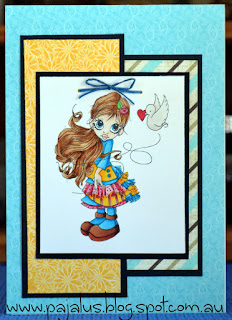 Because I used a previously printed digi image from Saturated Canary I couldn't turn the top layer into the fun shape.  I had a great time colouring Canary Love in with my Copics.  Unfortunately this is one of the few images I have left of her as I have managed to lose my USB stick of Digi Images that I had brought.  So when the dh is feeling charitable I might have to re-invest in her again.

Well lovelies, have a great day & happy crafting.  Thanks for stopping by.

This last week I have had a very creative time.  I have managed to make use of my Scraps and some digital images that I had previously coloured.  I am trying very hard to not cut up or buy anything new.  I want to thin out my supplies some more. So I managed to put these cards together with bits from my pp "leftovers" stash. 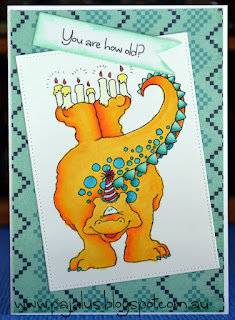 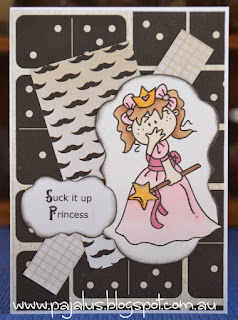 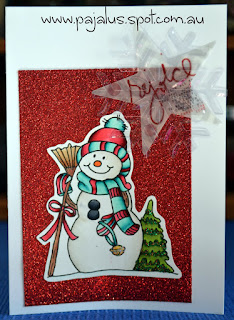 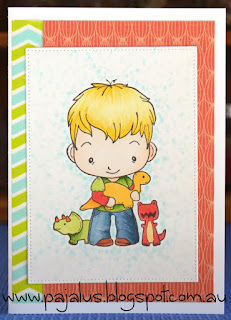 These four cards I put together using images that I had previously coloured and not done anything with.  Which made for some quick cards.  I decided to do something a little different with the "Princess" card.  I was inspired by this challenge that was on Sisterhood of Snarky Stampers.  I was too busy to put it in as second entry.  Apparently being a mother means I actually have to do "Mum" things, Who knew right?

Lilly had a friend over earlier today for a playdate.  So last night I made cupcakes, the icing and the mixture for mini quiches.  So that all I had to do today was make this card, cook the quiches and ice the cupcakes. 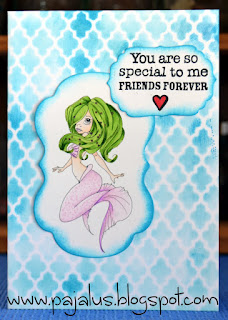 Zoe hasn't been well lately so she wanted me to make Zoe a get well card.  Bill picked out the image chose the purple for the mermaid and the sentiment that she wanted.  So while I was making this card, "The Mongrel Bloody Dog" decided to eat all 24 mini quiches that I had cooling on the bench (they had just come straight out of the oven).  Pippa the poohead is very lucky to be alive now, as well as big girl.  Emsy was in the same room as the dog & didn't see her eat anything off the bench.  Grrrrr at least we got to eat the last 6 that where cooking while Pippa was banned from the house.  Kids & dogs who'd have 'em!  At least the playdate was a success.  We even saw Doug once, he's dying from "Man Flu" at the moment.  Although Amanda (Zoe's Mum) thought I sounded worse than Doug.  Apparently my cold has affected him way worse than me.

Have a great day & happy crafting.

Today's post is based on this sketch from Freshly Made Sketches. 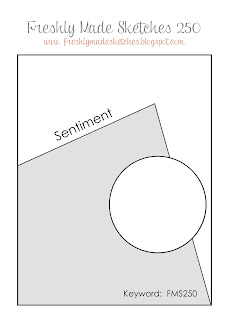 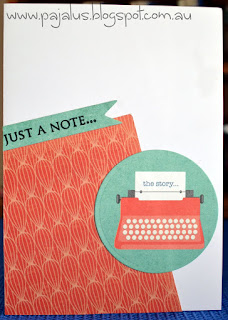 This is such a sweet & easy sketch.  Although I had to add the banner as I dropped my sentiment stamp as I lifted it.  Creating a "Shadow" on the first half of the sentiment.  I hate it when I do dumb things like that.  I die cut the typewriter image out with my nestability circle die & managed to get the banner out of the scraps leftover from that.  The orange pp was in my "Scrap Stash" & matched perfectly with the typewriter.

Enjoy your day & happy crafting everyone.

Quote of the month

I love these blogs.